The Nancy Grace Roman Space Telescope (Roman) will perform infrared surveys of the universe using its Wide Field Instrument (WFI). At the heart of WFI is an array of 18 sensor chip assemblies (SCAs) in a focal plane. Each SCA in the focal plane mosaic consists of a 4096x4096 pixel Teledyne H4RG-10 sensor. Each pixel is 10x10 μm in size. Each SCA provides both science data and guide window functionality.

Each SCA has undergone extensive testing by the NASA GSFC Detector Characterization Laboratory (DCL). To support the science community in preparing for Roman data, the Roman Project team at NASA GSFC has released a subset of the test data for SCA 21816. This page provides a primer on the specific data released and the basics of using these data. This document is not an exhaustive description of Roman data products.

In addition to this note and the data, the team also made available a Jupyter Notebook that demonstrates how to interact with the data files and a description of the FITS format and keywords of the DCL data products. New users may find it helpful to review this notebook to see how image data can be read and used in the Python programming language.

The data being made available are taken from the triplet tests in the DCL (Triplet Test FR03). In triplet tests, 4 flight SCAs are connected to 4 flight-like sensor control electronics (SCEs, known as ACADIAs, Loose et al. 2018) using flight-like electrical cables. During triplet testing, each flight SCA is operated as described in the table below. A triplet is defined as an SCA, an SCE, and a flight-like cable.

Each SCA is readout with 32 output channels; additionally, the differential signal from a reference pixel on the H4RG-10 is readout and digitized as a 33rd output, commonly referred to as REFOUT. The SCE software used during these triplet tests is Version 3.4b. Due to ongoing SCE software development, the version used in this triplet test may be representative of, but not identical to the version that will ultimately be used in flight.

Illumination in triplet testing is from an external Tungsten lamp that feeds light through a window in the dewar into a monochromator. Light at selected wavelengths exits the monochromator into an integrating sphere that provides uniform illumination across the 4 flight SCAs under test. The raw data are collected into FITS images with the coordinate system defined with (0,0) pixel in the lower left corner. This specific pixel coordinate system is not consistent with SCA physical coordinates or the coordinates that will be used in flight data (see Figure 1) and is specific to the DCL and this data release. Information about the exposures (e.g., frame time) is stored in the FITS header, following the description in the FITS format document accompanying this release.

The raw data from Roman’s H4RGs includes 4088x4088 active pixels and a border of 4 reference pixels on each side that can be used to correct offset drifts. In addition, a column of 128x4096 reads of a reference pixel of the H4RG-10, commonly referred to as REFOUT, is digitized. For additional information about the H4RG-10s of the Nancy Grace Roman Space Telescope, please see Mosby et al. 2020.

This file below describes the format and metadata keywords for DCL Triplet Test FITS files. 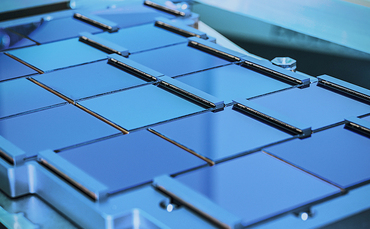 These data are taken to assess the linearity of the detector up to signal levels of ~80,000 e-. The raw data consists of 30 exposures with flat field illumination at 1400 nm. Each exposure has 42 consecutive frames up the ramp.

These data are taken without illumination to assess the detector’s read noise. The raw data consist of 39 exposures. Each exposure contains 56 consecutive samples up the ramp. One 16 x 16 guide window is also enabled in this data. Guide windows (GW) are used by Roman for attitude control. In normal operations, each SCA will have a guide window enabled. In this triplet test data, the GW is enabled and read out 16 times per frame as a functionality test. Each GW acquisition is 3 frames, 1 pedestal frame followed by 2 frames. For each full science frame, 48 GW samples are saved.

These data are taken to measure the conversion gain of the detector using the photon transfer curve method. The raw data consists of 21 exposures with flat field illumination at 1400 nm. Each exposure has 11 consecutive frames up the ramp.

These data are taken without illumination to measure the intrinsic dark current in the detectors. Dark current refers to induced signal from thermal or quantum tunneling processes. The raw data consists of 7 exposures. Each exposure consists of 21 resultant samples up the ramp, with each separated by 125 skipped samples. The total integration time of each of these exposures is approximately 2 hours. In the darks of this test, there is significant glow in the first ~300. This glow is not anticipated to be representative of flight performance.

These data are taken to assess the flat field uniformity. SCAs are illuminated by a flat field centered at the wavelengths 625nm, 875nm, 1050nm, 1300nm, 1450nm, 1600nm, 1850nm, and 2100nm with a 5-20 nm bandpass. More than one exposure is taken at each wavelength. See header information in FITS files to recover the specific exposure parameters.

Access Jupyter Notebook tutorials to interact with Roman DCL triplet-test data using Python. Click the links below to view the notebook in your browser, or download the notebook to your local computer and work through the steps on your own. Check back for additional notebook releases as more Roman data are released.

NOTE: This notebook was created and contributed by the Nancy Grace Roman Space Telescope Project Science Team at NASA Goddard Space Flight Center. MAST makes this notebook available "as-is" and does not take responsibility for its maintenance.