The Neil Gehrels Swift Observatory is a first-of-its-kind multi-wavelength observatory dedicated to the study of gamma-ray burst (GRB) science. Its three instruments work together to observe GRBs and afterglows in the gamma-ray, X-ray, ultraviolet, and optical wavebands. MAST serves as a secondary archive for the Ultraviolet Optical Telescope (UVOT).

The Neil Gehels Swift Observatory is a NASA medium sized explorer mission, developed in collaboration with UK and Italy. It was successfully launched on November 20, 2004 from Cape Canaveral (USA). The primary scientific objectives are to determine the origin of Gamma Ray Bursts (GRB) and to pioneer their use as probes of the early universe. The multiwavelength observatory carries three instruments: the Burst Alert Telescope (BAT; Gamma Ray), the X-ray Telescope (XRT) and the Ultraviolet/Optical Telescope (UVOT). Note only the UVOT data is being archived at MAST.

Key characteristics are the rapid response to newly detected GRB and rapid data dissemination. As soon as the BAT discovers a new GRB, Swift rapidly relays its 1-4 arcmin position estimate to the ground and triggers an autonoumos spacecraft slew to bring the burst within the field of view of XRT and UVOT to follow-up the afterglow. The Neil Gehels Swift Observatory is expected to provide redshifts for the bursts and multi-wavelength lightcurves for the duration of the afterglow. The BAT will also perform a high sensitivity hard X-ray sky survey. 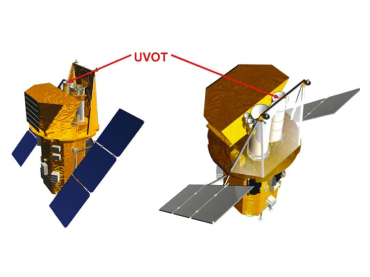 An Updated Ultraviolet Calibration for the Swift/UVOT

Select a Photo Below:

MAST made extensive use of the Swift web sites at HEASARC, Penn State, ASI Science Data Center in Italy, and the University of Leicester in England. All the catalog information and data sets available from MAST were provided by the HEASARC Guest Observer Facility.